In the biology and medicine area, microscopes are the most employed equipment which observes the cells with detail.   It is known that microscopes have been used since time immemorial.  From there to now, many advancements happened in the technique of phase contrast microscopy techniques. These advancements have led to good and structured observations of the cells and tissues. In a research lab also, microscopes are used for observing the cell culture and tissue culture.  Due to the upright and inverted microscope’s large sizes, complexity and cost,   microscopes do not come to a wider scene in the lab. These factors limit their uses which is not good for researchers and scientists.   In this light of the problem, smartphones are playing a crucial role.  The recent advances in smartphone technology have led to a significant impact on present-day microscopy techniques. It has transformed the bulky and expensive inverted phase microscope into portable and reasonable cost equipment.

The phase-contrast microscopy can also be executed on smartphone screens with ease. All smartphones of microscopy are all set with high computing power and high-performance sensors with a wireless network to ensure the portability of the device.  In addition to these, the camera modules in smartphones, in particular, have state-of-the-art image sensors with small pixel sizes and high pixel counts that enhance the image quality.  The microscopes using these built-in camera modules facilitate compact and portable imaging of all types of cells and cultures in the lab. It provides a wide range of opportunities for education, telemedicine, and remote diagnostics.  With the help of smartphones, the trinocular compound microscope has got new transformations that help in the process of observations of cells.

In phase-contrast microscopy techniques, smartphones play an important role. With the advancement in smartphone technology, the researcher can generate multi-contrasts images of cells.  With this technology, bright field, darkfield, and DPC fields images can be constructed. The smartphone uses a synchronized LED for this purpose. Here, the LED can help in proper illumination of the cells and cultures without the use of a smartphone camera module.

This device consists of :

In the microscopy technique, the basic strategy of the method involves color-coded LED illumination. In this method, red, green, and blue colors correspond to different illumination angles on the images generated. The biological image acquisition with a built-in smartphone color image sensor and subsequent decomposition and computation using the images in each color channel produces DF, BF, and DPC images in a single shot.  It saves a lot of time for researchers and scientists in the lab.

The operation of a mobile multi-contrast microscope is based on traditional microscopy techniques only. With the intervention of LED lights, microscopy has undergone a vast advancement.  Color-coded LED microscopy techniques are all demonstrated in smartphones which can generate good images.   In this technique, the LED array of light is used as the light source. It is placed at a  good distance from the specimen plane of the axis. This position is approximately located at the Fourier plane of the specimen used.  After this placement of the LED light source, the specimen then transmits the light from the light source to obtain a high contrast image.

Culture microscope, cell culture microscope, and tissue culture microscope can be used with the smartphone’s color-coded LED light technique. The color image sensor also plays a good role in the generation of high contrast images of the specimens. To obtain BF, DF, and DPC images in a single shot in the color-coded LED technique,  the LED array is patterned distinctly. The patterns consist of two half circles allocated to red and blue.   Here, the outer circle is assigned to green. The size of the circle is determined by the numerical aperture (NA) of the detection objective (OBJ).  So, the angles of the green LEDs correspond to illumination angles larger than the maximum acceptance angle of the inverted phase-contrast microscope.  With this smartphone technique, specimen images can be obtained.

For getting efficient images,  a specimen should get evenly illuminated by the LED lights. Both red and blue circles of light should be transmitted by each color.  Here, both of the colors should also reach the specimen placed at a certain distance from the light source. The color-coded LED light should be transmitted by each color, and reach the image sensors for perfect imaging. This makes way for the requirement of the objective lens, which is well built -in the smartphone’s camera lens. Here, the built-in camera lens is typically constructed from multiple refractive elements for image information. It is well characterized by a wide-angle of view, despite the small aperture.

The Image Correction For Distortion

The LED light array method is all set for creating good images of the specimen.  In this method, the objective,  optical aberrations, and discrepancy can also persist. Here, the actual camera lens can induce aberrations which further leads to image distortions. To compensate for this,  the researcher and scientists can examine the image distortion based on the camera calibration strategy. This all can help in eliminating image distortion skills.

The LED Imaging Of Biological Specimens When it comes to viewing the shapes of biological specimens, the LED imaging has to be subtle.  For example, the shapes of onion cells are visualized with the light rays. Here, three images are formed which are seen with the LED light microscopy.  These are called DPC images. On the other hand, dark-field images yield clearer delineation of the cells used in cell culture. The images of all biological specimens can be viewed in the smartphone-enabled LED light microscope.   However, some images are extracted from the resultant images of the biological specimens. The mobile cLEDscope ‘s patterned color LED array is constructed on a custom-designed printout circuit board (PCB). The circular patterns are divided in half and allocated to the red and blue LEDs. While the green LEDs are mounted along the perimeter of a circular pattern.

The circular pattern was divided in half red and blue to transmit light to the biological specimen. This helps in transmitting the LED rays to the samples.

A portable multi-contrast microscope can be operated on a smartphone for viewing biological specimens.  This technique is based on color- multiplexing of illumination angles of the biological specimens. This microscopic technique enables the acquisition of brightfield, DF, and DPC images in a single shot.  The smartphones with red and blue LED light over the entire field of view in the specimen plane.  For a given built-in lens sensor, the specimens are evaluated on several parameters of miniature objectives for microscopic imaging. Many best trinocular microscopes have the smartphone-based LED light technique. Some inverted microscopes also use the LED lights smartphone technology for better vision. 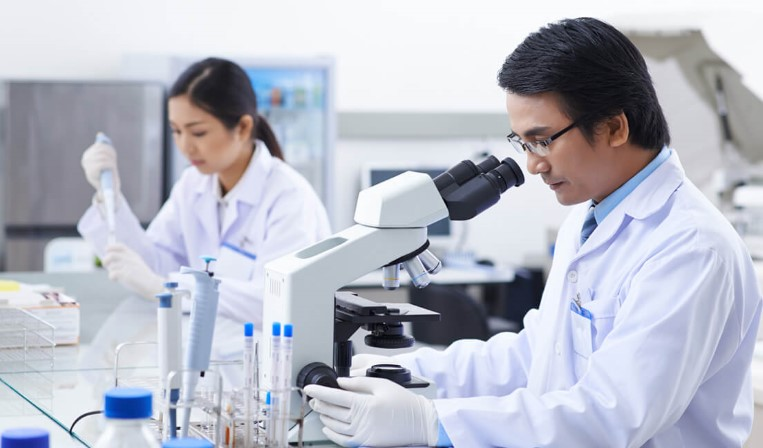 What Is An Inverted Microscope?